As the top-ranking official at the U.S. Department of Defense in charge of economic rebuilding, Brinkley and his organization of hundreds of business volunteers struggled against bureaucratic policies to revolutionize foreign aid by leveraging America’s strength—its private sector. In doing so, his team demonstrated success in the midst of failure, and created hundreds of thousands of jobs in areas long written off by the civilian bureaucracy as hopeless.

The lessons learned in these two nations were soon extended into the war-torn nations of Pakistan, Rwanda, and Sudan. 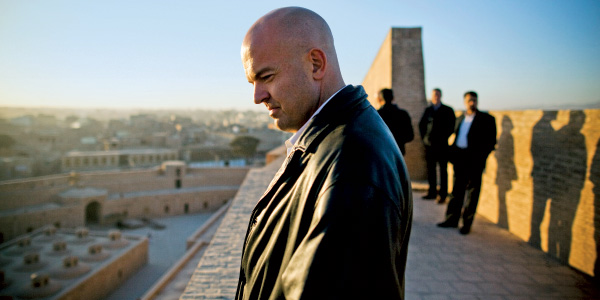 Brinkley, who worked under both the George W. Bush and Barack Obama Administrations, reveals why American foreign policy has left these nations in the Middle East and Africa disappointed, resentful, and suspicious of American intentions. Optimistic that America can deliver on its economic promise, Brinkley outlines in War Front to Store Front the necessary changes in U.S. foreign policy if we want to rebuild and revitalize an economy under fire.

“Brinkley tells a compelling, page-turning story. But it’s no fairy tale. Readers will share not only the vision and the importance of the cause, but also the many frustrations and roadblocks experienced along the way. This is an important book– there is much here that inspires, but also many important lessons and insights that Americans and their government need to learn and heed.”

“Paul Brinkley helped engineer one of the few success stories in America’s occupation of Iraq. He built on that success in Afghanistan and now has reflected on both experiences – and more — in this intelligent, interesting and important book.”

“A great story about fighting bureaucracy and making a difference.”

“This is an important book.  Not only does Paul Brinkley capture the bureaucratic impediments to effective civil-military efforts in conflict zones, he also demonstrates how we can become more effective in development and stability missions. The lessons are not theoretical, they are practical and the author and his team demonstrated how to apply an entrepreneurial approach to difficult problems.”

H.R. McMaster, MG, USA, author of Dereliction of Duty: Lyndon Johnson, Robert McNamara, the Joint Chiefs of Staff, and the Lies that Led to Vietnam.

“Paul Brinkley provides a compelling and highly readable assessment of Afghanistan from an economic and a political perspective, and America’s shortcomings in trying to build a stable Afghan state, based on his experiences throughout the country. I highly recommend this to policy makers as the transition of Afghanistan from military engagement to long-term development takes place in the next several years.”

“Paul Brinkley has written a compelling narrative about igniting economies through business creation in Iraq and Afghanistan in a war zone for two Presidents. The story of his heroic team of American citizens serving in harm’s way is a heart-warming and heart-breaking page-turner.”

“Paul Brinkley’s War Front to Store Front is a very personal portrayal of his tireless commitment to supporting U.S. efforts to bring peace and stability to Iraq and Afghanistan. Through his leadership at the Defense Department, Paul was able to improve the lives of countless Iraqis and Afghans, providing them greater stability, employment, and economic security, along with the hope that their lives would improve. Paul’s account provides solutions for overcoming Washington’s bureaucratic obstacles, and moving post-war economies toward more effective reconstruction.”

“Paul Brinkley captures America’s experience in Afghanistan and Iraq beyond the obvious.  His fascinating narrative describes a Gordian knot of politics, personalities, culture, and economic realities that confronted, and often confounded, the best of intentions. A must-read for engagement in the modern world.”

“Paul Brinkley’s commonsense approach to rebuilding Iraqi business and industry to provide jobs, incomes and goods to meet the country’s needs, and to drain insurgencies of manpower and motive, is one of the most significant civilian efforts ever undertaken during warfare. Mr. Brinkley’s brave and relentless engagement of US military and civilian leaders and of Iraqis and Afghans at every level of government and industry — from farms, villages and the front lines of battle to the US Capitol, give him a breadth of knowledge and perspective like no leader in Operation Iraqi Freedom or Enduring Freedom/Afghanistan. His is an essential record to be read, debated and relied upon by military and development specialists for decades to come.”

“War Front to Store Front is two intertwined tales: one, a fascinating account of how U.S. businesses can play a new and crucial role in stabilizing America’s overseas conflict zones, and another, a rollicking yarn about Brinkley’s team of young Americans dodging bullets and bomb blasts to accomplish their unique mission from The Tigris River to the Hindu Kush. A terrific read!”

Milt Bearden, author of 'The Black Tulip' and co-author with James Risen of 'The Main Enemy'